The latest news and releases.

Version 1.3.1 of Viscosity for Windows is now available!

1.3.1 includes a performance overhaul of Viscosity's background service. We've placed a focus on reducing memory usage by completely rewriting sections that were sluggish or relied on libraries that required large amounts memory. It now has up to 90% less memory and CPU usage, and should resolve any service start up issues.

The 1.3.1 update can be automatically installed from inside Viscosity, or downloaded and manually installed. For support with this version please visit https://www.sparklabs.com/support.

Version 1.3 of Viscosity is now available for Mac users! It is our biggest update yet, with heaps of new features and performance enhancements!

The 1.3 update can be automatically installed from inside Viscosity, or downloaded and manually installed. For support with this version please visit https://www.sparklabs.com/support.

We’re very pleased to announce that Viscosity for Windows is now available!

We’ve been working hard over the past 12 months to bring over all the power, ease of use, and design aesthetics of Viscosity for Mac to the Windows platform, and we believe Windows users will be impressed with the results. Windows users now have access to the same powerful and reliable OpenVPN experience that Mac users have come to expect with Viscosity. 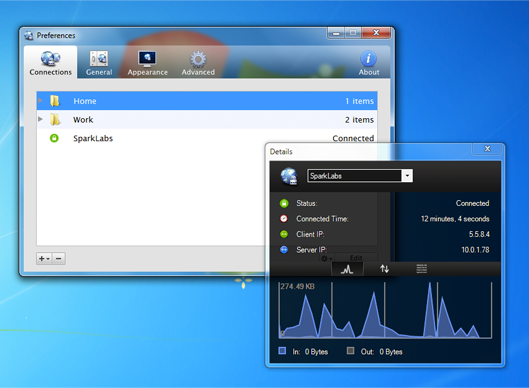 We encourage you to download Viscosity and take advantage of the free 30-day trial period to try out Viscosity for yourself. And like the Mac version, Viscosity is just $9 to buy.

Viscosity and the App Stores

Both the iOS and Mac App Stores present a compelling experience to end-users, yet to date Viscosity is unavailable on both of them. Not a day goes by without an email arriving in our inbox asking when we plan on making an iPhone version, and more recently, asking when Viscosity will be available on the Mac App Store. So rather than continue to answer these requests individually, we thought putting up a blog post answering the issue in depth would be a good idea. However just a warning: unfortunately the news isn't good!

Like other Mac developers we were initially hesitant to submit Viscosity due to some of the App Store policies (no trial period, no discounted upgrade pricing, support, and so forth), but there is no question that the App Store makes installing software much easier for end users. Ultimately we think it will become the main method Mac users will use to find software, so we made the decision to add Viscosity to the Mac App Store if we could. However we can't.

First a bit of background information. When you first run Viscosity is asks for admin rights (or "root" for the *nix folks). This is necessary so Viscosity can create a network interface for your connection/s, setup your DNS servers, and setup the correct routes for your remote network (among other things). Ultimately it doesn't seem like this should prevent an application from appearing on the App Store. After all, the review process should prevent apps that want admin rights for a nefarious purpose, and there are many, many existing Mac applications that require elevated rights so they can integrate with the system. However point 2.27 of the Mac App Store Review Guidelines forbids this:

As you can see, there isn't much in the way of wiggle room there. While we believe we can work around other restrictive points, unfortunately point 2.27 is pretty much a show stopper. We can only hope that Apple change this rule in the future.

For a long time now we've been getting emails asking us for an iOS version of Viscosity on the App Store. It's something we'd absolutely love to give you guys however unfortunately, like the Mac App Store, there are a few rules preventing such a release.

The two most notable clashes with the App Store rules are that OpenVPN can't run in the background on iOS (without turning to private APIs), and Viscosity needs elevated rights to make the required network changes. While we hoped iOS 4's multitasking implementation would allow us to do the former, it is unfortunately not "true" multitasking. This leaves the conclusion that there is no hope of a Viscosity for iOS release through the App Store unless Apple make some of their private APIs public.

Another interesting point of possible contention has been raised by the recent removal of VLC from the iOS App Store. VLC was removed due to a possible clash between the GPL and the App Store's Digital Rights Management (DRM) scheme. OpenVPN is also licensed under the GPL, so if it was included in a similar fashion to VLC it may also clash. Luckily we don't believe such a clash would exist with Viscosity as the DRM is applied to the Viscosity app itself (not the OpenVPN binary) which is not licensed under the GPL. However the issue still deserves consideration.

While an official iOS App Store release may be out the window, we're still considering a release for jail-broken devices. We cooked up an experimental version some time ago, so we know it's something we can pull off. However at this stage we're focusing on other products (Viscosity for Windows and Viscosity Server). We will no doubt revisit this option at a later date, so if it's something you'd like to see us focus on make sure you let us know via the forums, Twitter or email!

So as discussed above, Viscosity will not be appearing on either App Store due to policies outside our control. We'd love to release Viscosity for both, so we'll be keeping up dialog with Apple in the hope of a policy change that will allow Viscosity to be submitted. We'll continue to support purchasing Viscosity through our website (and you can even try it out for free for 30 days!) and we hope you will continue to enjoy using it (Mac App Store or not)!

With the 2010 almost over we thought we'd take the opportunity to bring everyone up to speed with what we're working on and what we have planned for early 2011 (we're working hard, honest!).

We are very excited to have finally reached the beta phase for the Windows version of Viscosity. If you use Windows (or know someone who does) we'd love for you to download the latest beta and take it for a spin! We need your help spotting bugs and shaping features, so we'd appreciate any comments you can offer. For more information, and for access to the beta, please see this page. Once we're confident all bugs are squashed we will release the full version (we except this to happen very early next year).

Viscosity for Mac hit its two year birthday a couple of months ago, which was a great milestone! We have been working hard on adding features and making general improvements since its release. Looking forward, version 1.3 is in the works, which squashes some bugs, adds improved enterprise and provider support, and greatly eases deployment to end users. We expect version 1.3 to be fully released early next year.

We appreciate all the feedback and interest you've expressed for Viscosity Server. We're very, very keen to have a beta release available as soon as possible, which is likely to be early next year. Our initial plan was to have a beta version available before Viscosity Windows, however based off user feedback we decided to make it our priority to release Viscosity Windows first. We'll be doing everything in our power to bring Viscosity Server to you as soon as possible! We have been promising some sneak peaks, and while we don't think the interface is ready yet, hopefully the following screenshot (of the main status window) will tide you over! Just remember, it's still a work in progress! 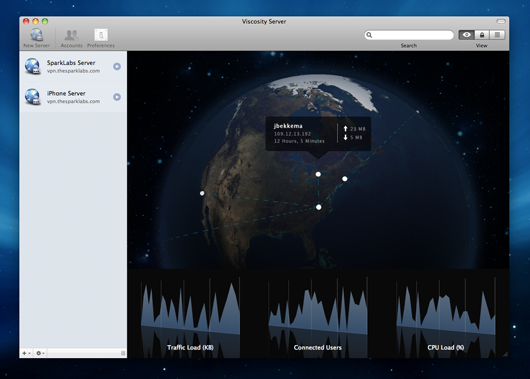 We know that many of you are not fans of PayPal (who we use as our primary payment provider). To that end, we have teamed up with RBS Worldpay to allow us to offer a faster and more streamlined store. Over the next few weeks we'll be bringing the new store online, which should hopefully alleviate any issues with PayPal and make purchasing Viscosity much simpler. Paying via PayPal will of course still be an option.

Finally we want to say thank you for your support, great feedback and suggestions, and purchases, all of which allow us to focus on developing great software. Our products wouldn't be the same without you!

We're very pleased to announce that Viscosity for Windows has hit beta phase! If you've got a knack for breaking things, able to offer well written bug reports, and willing to offer constructive feedback, we'd love to include you as a beta tester!

Simply click here to visit the beta signup page. You'll get early access to Viscosity for Windows, help shape its features, and a limited number of free licenses will be given away to those who provide the best bug reports and feedback. 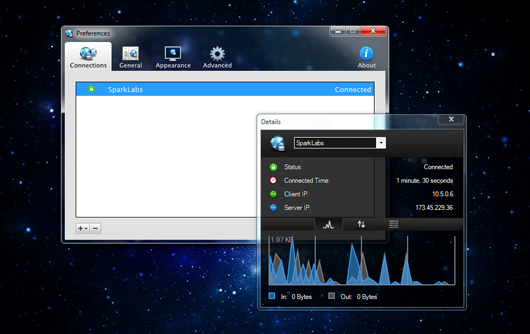 Viscosity turns two years old today! To celebrate we're giving away 10% discount codes (for a limited amount of time) to anyone who follows @spark_labs on Twitter!

Click here to visit our promo page and instantly claim your 10% coupon code.

Version 1.2 of Viscosity is now available! Version 1.2 is a free update, and includes many new enhancements, such as:

The 1.2 update can be automatically installed from inside Viscosity, or downloaded and manually installed. For support with this version please visit https://www.sparklabs.com/support.

We here at SparkLabs are big fans of pfSense, using it to manage both our work and home networks. We also know a great number of Viscosity users connect to routers running pfSense, so we were very happy to see Viscosity featured in pfSense: The Definitive Guide by Christopher M. Buechler and Jim Pingle. 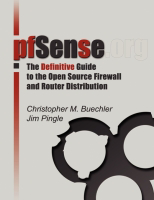 "If you use OpenVPN frequently, Viscosity is a much nicer client and well worth the cost."

As well as covering a great deal about network setup, the book also contains an in depth section dedicated to setting up pfSense to act as an OpenVPN server. It contains a great deal of information about how to configure and use Viscosity to connect to your pfSense router.

We highly recommend picking up a copy of pfSense: The Definitive Guide if you are interested in setting up your own pfSense OpenVPN server and using Viscosity to connect to it.

Version 1.1 of Viscosity, a free update, is now available! This new version includes many new enhancements, such as:

The 1.1 update can be automatically installed from inside Viscosity, or downloaded and manually installed. For support with this version please visit https://www.sparklabs.com/support.